This site runs on CentOS 8, on an AWS t2.micro EC2 instance. It’s all free tier at the moment as this is very much a trial run/learning experience.

It’s taken several attempts over the last few months to get the instance running nice and stable. I was getting regular out-of-memory errors, with mysqld just killing itself. It would then get caught in an endless suicidal loop because the restart of the service caused another out-of-memory error.

However, I’m not sure that mysqld was really at fault. I don’t think php-fpm was very well configured. When I set the site up I followed a few tutorials that didn’t really explain how to clean-up afterwards and I ended up running way more php-fpm threads/children than needed for such a tiny, low traffic site. Since I did that, I have not had a crash and have not had to restart the instance. 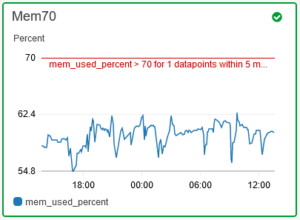 Yesterday, I was finally able to get an AWS Cloudwatch dashboard set up that actually showed me what was going on. That part was surprisingly easy compared to setting up Cloudwatch itself, which, even following AWS’ on tutorials, was a bit of shot in the dark.

As I said, it all seems pretty stable now so I am adding new WP plugins etc very slowly so I can see if any one thing causes a problem.